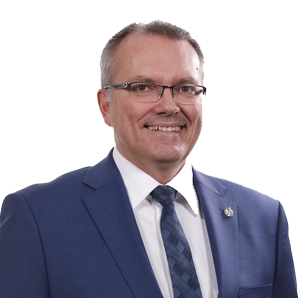 Luc Berthold was born in Sherbrooke. He’s the father of three children, two daughters and a boy. Luc has lived in the riding of Mégantic-L’Érable for the past twenty-nine years.

His professional experience begins as a journalist and radio host for CKLD radio. In 1996, he’s Chief Editor of the ‘’Courrier Frontenac’’. In 1999, he’s Nathalie Normandeau’s  Political Assistant, and communications advisor for the Leader of the Official Opposition. In 2003, he’s the Political Assistant for the Minister for Regional Development and Tourism. The following year, he becomes Chief of Staff for the Minister for Transports, Julie Boulet. In 2006, he fills the position of Interim Director of communications for Quebec’s Liberal Party. In the spring of the same year he’s elected Mayor of Thetford Mines until 2013. More recently, Luc Berthold is self employed, working as a speaker, coach and trainor, and he gives leadership training sessions.