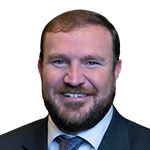 Eric Duncan has had a successful career in both the government and private sector at the age of 31. He brings a mix of public and business experience having served in various capacities at all three levels of government and working at his family’s trucking business, JED Express, in South Dundas.

He was one of youngest elected officials in Canadian history as a municipal Councillor in North Dundas at the age of 18, and was elected Mayor in 2010 at the age of 22 with 72% of the vote. He made further history as the youngest Warden in SD&G’s 168 year history in 2014.

Eric became the first consecutive term Warden in the Counties’ history the following year, which allowed him to be elected Chair of the Eastern Ontario Wardens Caucus in 2015, an influential group of regional governments in Eastern Ontario that works with the provincial and federal governments on policy issues.

Eric works alongside his father Edwin at JED Express in South Mountain. Their family business that employs over 60 staff has been named one of Canada’s Best Managed Companies® annually since 2016.

With a passion for community volunteerism, Eric is involved with numerous causes, including founding Camp Erin Eastern Ontario (a bereavement camp for children who have lost a close family member). To date, he has been involved with nearly 50 organizations, groups and events in his community, raising millions of dollars for charity and important causes.