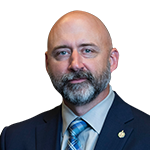 Alex Ruff grew up on a farm in Tara, ON and upon graduation from Chesley District High School enrolled in the Canadian Armed Forces (CAF) in June 1993. He attended university at the Royal Military College (RMC) of Canada in Kingston, ON.

On graduation in 1997 from RMC with an Honours Bachelor of Space Science, he was commissioned as an Infantry Officer into The Royal Canadian Regiment (The RCR). Throughout his 25 plus years, he served in Petawawa, ON, Kingston, ON, Gagetown, NB, Toronto, ON, and Ottawa, ON. He has six operational deployments including the QC/ON Ice Storm (1998), two peacekeeping tours in Bosnia (1998−99 and 2001), two tours in Afghanistan (2007 and 2012) and finally one tour in Baghdad, Iraq (2018-19).

He has extensive experience in project management, training, planning, joint operations, doctrine, budget management, government and international relations (NATO, NORAD and other allies). He has commanded soldiers from the platoon (approximately 35-50) to the battalion level (approximately 1000).

He retired from the military in early 2019 as a Colonel. He was successfully nominated as the Conservative candidate for Bruce-Grey-Owen Sound on April 22, 2019. He is a strong advocate for rural Canada, farmers, responsible management of the economy, small business owners, seniors, the military and veterans.

Alex enjoys most sports, canoeing and has SCUBA dived all over the world. He has one young daughter and lives in Tara, Ontario.