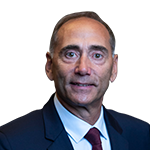 Richard Martel holds two degrees from Université du Québec à Chicoutimi – one in teaching, and the other in physical education. Richard was a Head Coach and Managing Director in the Québec Major Junior Hockey League (QMJHL) for 18 years. He also coached professional hockey teams in Europe, and in the North-American Hockey League where he won the championship with the Jonquière Marquis. He remains the Commissioner of that League.

Proudly from Chicoutimi, Richard twice won the Ron Lapointe trophy awarded to the Coach of the year in the QMJHL – first in 1993-1994, as a rookie coach for the Saint-Hyacinthe Laser, then in 2004-2005, when he was coaching the Chicoutimi Saguenéens. Still today, Richard is the winningest coach in QMJHL history, with 589 wins. His 1,171 games as a coach are still an unequalled record to this day. For 11 years behind the bench of the Chicoutimi Saguenéens, Martel filled the hearts of the fans gathered at the Georges-Vézina Centre.

Richard has made discipline, intensity, hard work, and passion his trademark. He is demanding, never settles for half-measures, and is a talented communicator.

In 2017, after a remarkable and impressive track record in the fields of education and sports, Martel decided to take on a new challenge and jump into the federal political arena. He aspires to promote the values he has become known for, and those of his constituents. He wants to put his skills and experience to work representing the region he grew up in and made a life in.

He’s always had an interest for politics and finance, and feels it’s the perfect time to tackle this challenge. Richard feels the Conservative Party of Canada has proven its worth – particularly on the economic front; the rigorous management of public finances; and the debt reduction – issues that for him, remain fundamental.