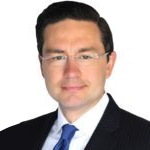 At age 39, Pierre Poilievre is undefeated in five elections and has served for 12 years as the Member of Parliament for Nepean-Carleton (now Carleton). As Official Opposition Critic for the Treasury Board, he is currently a member of the Public Accounts Committee, which investigates Auditor General’s reports on government spending and the management of taxpayers’ money.

Prior to the last election, Poilievre served as Minister of Employment and Social Development—the largest department in the federal government—where he oversaw the successful rollout of the increased Universal Child Care Benefit. The department he led is also responsible for Old Age Security, housing, job training, Employment Insurance and poverty reduction.

In 2013, Poilievre became Minister of Democratic Reform responsible for drafting the Fair Elections Act and stickhandling it through Parliament. It cracked-down on the undue influence of money in politics, made it easier for people to vote and required they show identification before doing so.

That law built on his work as Parliamentary Secretary to the Treasury Board President, wherein he helped then-Minister John Baird pass the Federal Accountability Act through Parliament. Later, he served as the Prime Minister’s Parliamentary Secretary (2008-2011), during which he co-authored the Conservative 2011 election platform, which helped the party win a majority government and led to spending reductions, tax cuts, and a balanced budget.

Poilievre has become known for championing causes brought to him by constituents.

Most recently, he worked with the Liberal government to help save the life a local small businessman. Colin Perera was in the late-stages of kidney failure when his nephew in Sri Lanka offered to come to Canada to provide an organ transplant. Immigration Canada denied his visitor visa. After Poilievre learned of the problem, he worked with the Immigration Minister, John McCallum, to secure a rare Ministerial permit so the nephew could enter Canada for the operation, which is expected in spring of 2016.

Similarly, a Canadian Armed Forces Major from Osgoode informed Poilievre that the government prevented him from spending time with his new baby, when it denied his parental leave under Employment Insurance. Major Jim Duquette’s benefits had expired while he was on military deployment in the Middle East. According to the rules, prisoners could defer their benefits while in jail, but soldiers could not defer benefits during a mission. Poilievre convinced the government to introduce the Fairness for Military Families Act, which allows soldiers to defer their parental leave until after they return from military missions, giving them precious time off with their small children.

In 2005, an Osgoode farming family brought the idea of a Children’s Fitness Tax Credit to Poilievre, who shared it with then-Opposition Leader, Stephen Harper. He campaigned on and implemented the tax credit in 2006. It allowed families to claim up to $1000 per child in sports registration costs. (The Trudeau government has since cancelled it)

Poilievre lives in Greely, Ontario, a village in south Ottawa.